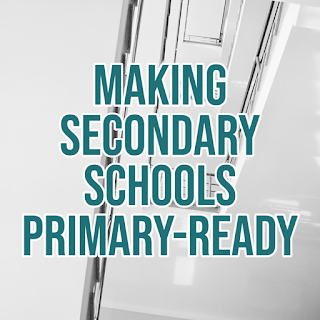 We talk a lot of making sure that year 6 children are ‘secondary-ready’. But what if we’ve got that all wrong, or at least partly wrong? What if we actually need to make secondary schools ‘primary-child-ready’?

As a primary-trained teacher who has spent the majority of my career working with UKS2 children, I understand why this is the focus: there is nothing year 6 teachers can do to change the secondary experience – all they can do is change the year 6 children.

In my current role as primary deputy head in an all-through school I have had the privilege of being able to go beyond that, though. I have been able to work with my secondary-based colleagues to work on how we can make our secondary provision more ready for children who are only 5 weeks older than they were when they left primary school.

Starting back at the end of August, it is quite easy to acknowledge, despite the best efforts of primary teachers (in over 30 feeder schools, in our case), that these year 6 children, having been used to the primary experience for the entirety of their time in education, cannot be completely ready for the huge sea change that is secondary school.

Sure, their teachers may have explained timetables, room changes, having their own equipment, typical sanctions, the fact that the building is bigger, lunchtimes and all the increase in independence that is required to tackle all these things, and they may have gone so far as to reflect some of these aspects in their own practice, but without experiencing these things day in day out, inside a secondary school, primary children will not be fully secondary-ready.

They may be emotionally and mentally ready – and this is the true work of the primary school in making children secondary-ready – but even the most well-prepared, excited, practically-minded, optimistic, confident 11-year-old can be flummoxed by which room they’re in next, where that room even is, who is teaching them, which equipment they need, and where on earth the toilets are en route to their next lesson. They may have moved up with a whole gang of their friends and feel super-secure in their relationships, but throw a load of new children into the mix – including great hulking year 11s, and that’s enough to throw anyone, even the most confident, friendly adult who walks into a brand new social situation can struggle.

But it isn’t just primary schools who perpetuate the idea that the only thing we can do to ensure a smooth transition to secondary is make children secondary-ready. It is secondary schools too. And, I really do hesitate to say this as it is very easy to point the finger from the other side. As already mentioned, primary teachers can do very little to alter the secondary experience for year 7 children, but secondary schools have all the power to do so.

With a little thought, some willingness to change the status quo, and probably some collaborative working between primary and secondary staff, secondary schools could really make all the difference. No longer would they have to rely on a plethora of primary teachers to make a whole cohort of year 7 children secondary-ready. If year 7, and perhaps even beyond, was viewed as a time to gradually immerse children (for they are still children) into the ways of secondary school, then that initial culture shock of moving from primary to secondary could be eradicated.

There are many ways this could take form, but there is a general principle to be adhered to, one that many of us a familiar with with regards to learning: reduce the cognitive load.

Coming to secondary school for the first time is overwhelming – overfacing as we say here in Yorkshire. It is a lot of newness. If the number of new aspects of school life are reduced, and children are allowed to focus on acclimatising to a limited number of changes, then they are more likely to feel less overwhelmed and more capable of success in particular aspects of school life.

Then, once certain aspects of school life have become more automatic and embedded, additional changes can be slowly introduced over time so as to build up to a full complement of the necessary aspects of secondary school.

The question for schools is then: which aspects of secondary school life do we want to help acclimatise year 7 children to first?

Each school will probably have a slightly different answer to that question depending on their context, although there are probably common answers: learning, routines for learning, relationships might be some of those common answers.

At our academy we have decided that we want to build relationships and ensure that learning is prioritised, and, as such our first project was to develop a new KS3 curriculum which in some ways reflects the style of curriculum year 7 and 8 children will have been used to at primary school (I intend to blog about this in the future). We have also planned to make lots of logistical changes which support these aims, which I’ve outlined in another blog post.

The changes that we have made, and plan to make, are consistent with the above concept of reducing the cognitive load that comes from making the leap into secondary school. It won’t be the case that the whole of their secondary experience will be like that of their year 7 and 8 experience, but that things will change more gradually as they get older, helping them to become secondary-ready over a longer period of time and accepting that much of secondary-readiness can be developed once they are actually at secondary school. Our approach accepts that year 7 doesn’t have to be a mini-year 11, but that it can be just a few small steps on from year 6, which in terms of child development, it is.

The point of this blog post is not to say this is how to do it, but to say that things could be different, and that if they were, children might transition into secondary school better and in the long term their secondary career could be improved as a result of a more supportive formative experience.

I think I would go so far as to say that things should be different, too: that transition should involve more than a project a few weeks before and after the summer holidays; more than an open evening and a transition day; more than some data being handed from one school to another. It will take a lot of time and effort but if it means that year 7 children get a better deal, and that it has a long-lasting effect on their time at secondary school, I think it is worth it.