Book Review: 'The Fox Girl and the White Gazelle' by Victoria Williamson 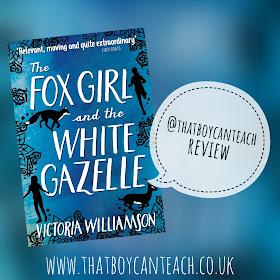 'The Fox Girl and the White Gazelle' deserves to be one of 2018's most lauded books. Tackling racism, discrimination and bullying head-on in a book aimed at upper primary children is no mean feat, but Victoria Williamson does it with great sensitivity.

Reema and Caylin both have their back stories. One is a refugee from Syria, the other lives with her alcoholic mum and is the school bully. Reema pines for home, is worried about her missing brother and is having to start a new school and learn a new language. Caylin looks after her mum, wishes her mum would look after her and feels like she is no good at anything. But they happen to be neighbours and an unlikely friendship develops. But Williamson writes the slowly-flourishing relationship in such a convincing way that 'unlikely' becomes 'blindingly obvious'.

This is achieved by the back-and-forth nature of the story's narration. The girls take it in turn to tell their side of the story, the reader in the middle willing them both to discover their commonalities: they are both unknowingly looking after the same injured fox; they both love, and excel at, running; more importantly, they both desperately need a friend.

With some very stark and honest passages, this book pulls no punches. Clearly Williamson believes that children can hack the reality - a racist criminal setting his dog on Reema for wearing her hijab is not just a fictional occurrence. For children to really grasp the desperate plight of those subject to racism in the UK, such parts of the book are essential. However, the book almost glows with hope and optimism, even at the moments when it seems like things can't get any worse.

And it is not just empathy for Reema as a refugee that is important. Caylin's character is written in such a way that light is shed on the background of a child in need; a child whose needs manifest in bad behaviour. Children with a more privileged upbringing need to empathise with children less fortunate than themselves just as much as they need to empathise with those fleeing violence and oppression (and so do teachers).

This is a book that I wish every child would read. Politically and socially our children need to be living out the story in this book if the world is going to have any sort of peaceful future. The book's dual message that differences ought to be celebrated and common ground should be sought is too important for this generation to miss out on. Books such as this are a safe space in which to explore the everyday issues that children might face - we must get these books into their hands.

'All The Things That Could Go Wrong' - Stuart Foster - another story narrated in turn, this time by two boys, one with challenging life circumstances and one with OCD, who eventually become friends
'Dear World' - Bana Alabed - this autobiography of a Syrian refugee will help children get a feel for what Reema has escaped
'Oranges In No Man's Land' - Elizabeth Baird - a fictional account of life as a child in a war zone; another opportunity for children to consider the horrors of war that refugees flee
@thatboycanteach at 21:36