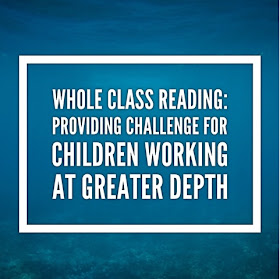 With whole class reading increasing in popularity, one of the most asked questions is around the issue of catering to the needs of all learners. Recently, I tackled how to help lower prior attainers within the whole class reading session and promised at the end of that blog post to write this one. So here it is.

To preface my suggestions I'd like to point out that this list is not at all exhaustive and what you do with the children in your class who are working at greater depth should very much depend on what their individual needs are, based on your assessment of them. I'll also admit that although some of these are ideas that I've tried out, others are ones that I'd like to try so any feedback when you have tried them would be gratefully received!

I've also managed to get some insights from some other teachers who are advocates of the whole class approach to reading, so it's not just me going on at you for once.

Howay, let's get doon to business.

This is an obvious one. To be working at greater depth you would expect a child to be working independently. If you've been providing vocabulary definitions for the children then remove this and require that the children use contextual and morphemic analysis to work out word meanings. If you've been giving children prompts as to how to word an answer, remove these. If you've been doing something similar to my Scaffolding Inference technique (where you lead children towards making inferences by first asking relevant questions about vocabulary and information retrieval) then switch to providing a variety of question types that don't link or scaffold.

This will just be an extension of the skills required to be age-related but you might require children to find more pieces of evidence from the text, and to give more detailed explanations as to how the evidence they have found helps them to answer the question. Sometimes structures borrowed from secondary school can be helpful (ie PEE) but an over-reliance on structures is probably not what you'd expect of children working at greater depth. In a sense, what you are looking for here is that reasoning that we expect children to do when working in maths. Linked to this, you might look to set more difficult inference questions, for example ones that might rely more heavily on prior knowledge*, than on what information is presented in the text (*all inferences rely on some amount of prior knowledge).

If it's SATs you're thinking of, then time is at a premium. If you want your greater depth children to have a chance of answering the questions about the third text well, then they're going to need a decent amount of time during the hour to do it. This time is only really available if children work quickly through the first two texts. But quick work can often mean mistakes are made, so we need to ensure that rather than rushing children are really good at giving succinct answers. Perhaps you could give a word limit on answers, or get children to edit their existing answers down so that thy still communicate their understanding, but with an economy of words. This technique is part of the Reciprocal Reading approach.

If children are already a dab hand at answering the whole range of comprehension questions (verbally or in writing) then ask them to produce a creative written piece in response to what they have read. Perhaps they could rewrite something in a different genre, write their own version of what they've read or write the next part of the story using clues from the text? You can specify as much or as little as you like as to the outcome, but you might want to stipulate that their writing demonstrates a reading skill, for example, that what they produce summarises all the main points of what they've read.

Comparisons to other texts

Children working at greater depth should have the capacity to read several texts within a lesson, including the whole class text, and to respond by comparing them. This variety of texts could be provided by the teacher, or selected from the library by the children themselves. You might want to point them in a general direction by asking them to get books on a particular theme, or containing certain character types. You could make it really difficult and ask them to draw parallels between their current reading book and the class text - there may be very few links so this would really stretch their comparison skills. The outcome of an activity like this could be written or verbal and could be developed into a short presentation such as one entitled If you like the class book, then you should also read...

This could be done as more of an extension task. Children could read ahead looking for words and phrases that their peers might need clarification on. They could then access a computer to create a interactive whiteboard slide which contains word meanings, or pictures of unfamiliar nouns, for the next lesson. This will encourage them to engage with the text thoughtfully and will also challenge their own vocabulary skills. Alternatively, they could create a set of questions, based on question stems and the reading domains (see my Reading Roles for a way to get children really autonomous with this) which could then be used in the next lesson.

Similarly, Ashley Booth (@MrBoothY6) suggests a children predict the questions they are going to be asked:


"I like to get my higher ability to read the text independently and then predict the questions they believe will be asked."

Read and respond to more

This is a simple tweak. Whereas lower attainers and your core group might be focusing on smaller chunks of text, children working at greater depth could be looking at large excerpts, or even whole chapters, particularly when it comes to summarising. For example, in the third text on the 2017 Reading KS2 test, questions were asked that require children to either skim or scan large parts of the text in order to locate information that would help them with providing an answer. This kind of exercise definitely builds resilience - our children working at greater depth can't get away with saying 'But there's nothing in the text to help me answer this!'.

Debate is a great way to get children responding to a text. It would require a certain amount of collaboration if children were to work in teams to develop an argument either for or against a notion proposed by the teacher. Alternatively children could debate one on one after spending some time developing their argument independently. Another option would be to get children to write a discussion text where they present both sides of an argument. To really push children on this, you could children to work together to come up with a notion based on the book or text they have read. For example, notions could be around whether or not a character acted morally, whether or not a character is good or bad, whether or not a character should do what they are contemplating doing.

Linked to this, @_MissieBee has asked children more formal test-like questions along these lines:


"Something I’ve found that challenges the kids is to find evidence to support opposing points. For example, in a mock 3-mark question based on Wonder, I might ask “August is a shy character. How far do you agree with this statement?” They would they have to find evidence to argue both sides of the coins - where/how does he show he is shy, but also, does he do something that could prove that he isn’t? If they don’t do this effectively, it’s also a good lesson in how a quote can be taken out of context (in the media!)."

Another debate-related activity is this idea from Rhoda Wilson (@TemplarWilson):


"Posing questions with no clear-cut answers encourages the children to argue their point of view, justifying with evidence from the text.
For example, the question Who is most to blame for the death of Romeo and Juliet? could be answered and argued in lots of different ways:
Once the different arguments have been generated, they can be ranked from most to least reasonable and justified with evidence from the text."

And now for some more ideas from some of your favourite Whole Class Reading advocates:


"I'm currently trialling something I read Herts For Learning are giving a go in terms of intonation and expression. I'm spending more time focusing on children reading accurately and correctly, thinking about which words to emphasise in sentences and which syllables to stress when pronouncing longer words (we have very high % of EAL and this is proving beneficial).

This in turn is allowing children working at greater depth to start playing with this aspect of the curriculum and it has been really exciting so far to see them do something they've never done in class before. Children can change the stressed words in sentences/extracts to see if they can change the meaning by doing so. They can also change their expression (tone, speed, volume) to manipulate meaning and discuss author intent. They then need to share and explain these meaning shifts to others. This is not only supporting their fluency when reading but also allowing them to purposefully manipulate inferences rather than just decipher them, as well as explain a complex process to their peers."

Alex Rawlings (@MrARawlings) has worked with his children who are working at greater depth on answer questions where two different reading domains are combined:


"An example of this would be requiring the children to make a prediction as well as give an explanation of author's intent. The question might be: 'Use the text to help you predict how the character will respond and explain why the author would allow this to happen.' So children would have to predict what would happen to a character next based on what is stated/implied in the text, and then record an explanation about why the author would want this to happen to the character. Maybe the author wanted you to feel sorry for him/her; or the author was staging a twist in the story as the plot has plateaued; or as the story has reached its climax, the author is beginning to tie the loose ends of the storylines; or maybe the author wanted the character's reaction to be unexpected as he/she wanted to leave the story on a cliffhanger."

I hope all these ideas are useful as you develop both your practice as a teacher of whole class reading and your children who are, or have the potential to be, working at greater depth. I leave you with a challenge of your own from Jo Payne (@MrsPTeach):


"Think of the children working at greater depth when planning your main lesson objective and activities. Aim them at your strongest readers and scaffold and support others to achieve the same or similar. That way, you know they'll be challenged appropriately. We call this top-down planning."